The Genesee Rebels took two big games from the Ixonia Snappers on Sunday afternoon. The Rebels won game one by a score of 4-1 and squeaked out a close one with a 7-6 victory in game two. The two wins give Genesee a record of 4-5 on the year. The two victories for the Rebels were the product of solid starting pitching performances from Matt DeMarais and Keith Koehn. The two combined to throw 11 of the 14 innings on the day and only allowed two runs between them.

In Game One, offense was hard to come by as the Rebels' bats were kept off balance with a steady dose of off speed pitches. Genesee jumped out to an early 1-0 lead in the bottom of the first when rookie Alex Kermendy reached on a single, stole second, and later scored on a Kyle Stasik rbi single. The Snappers tied it in the top of the fourth, but the Rebels finally put it together in the bottom of the 5th when they plated 3 runs. Chris Elliott started the scoring with a one-out single and then promptly stole second. He scored on a Kyle Stasik double to the right-center gap. Lucas Bourassa then walked. The runners moved up to second and third during a Mitch Hauser strikeout that squeaked by the catcher. It looked as if Ixonia would escape the inning allowing only one run, but rookie Jalen Bilty came up huge with a two-out, two-rbi single up the middle.

Ixonia threatened in the top of the 6th when they loaded the bases with only one out on three bloop singles. DeMarais buckled down and induced a shallow fly out to right field and then ended the threat by striking out the 9-hitter to escape unharmed. Rookie Nate Labott pitched a scoreless 7th to notch the save.

Game two looked like it was going to be all Genesee. Lucas Bourassa plated two runs in the bottom of the first with a two-out, two-run RBI single. The Rebels put three more runs across in the bottom of the second, taking advantage of two Ixonia errors and again getting clutch two-out rbi singles from Chris Elliott and Kyle Stasik. Genesee added to their lead in the bottom of the 3rd by plating two more runs but left more runs on the table as they stranded the bases loaded to end the frame.

Seven runs looked like it would be enough as Keith Koehn was dominant on the mound, allowing only one run through five innings. Things got a little messy for the Rebels in the 6th when they turned the ball over to rookie Brett Zickert. Zickert had been solid in his previous outings but struggled in this relief effort. He walked three and allowed three hits on route to allowing 5 runs in the frame. With new life, the Snappers looked to continue the damage in the 7th and steal a victory. Unfortunately for them, Genesee gave the ball to rookie Alex Kermendy who pitched a near perfect 7th inning, striking out the first two hitters he faced before inducing a 6-3 groundout to end the game and earn the save.

The two victories put the Rebels in 6th place in the division, holding on to the final playoff spot. With the season nearly half over, the Rebels have survived an extremely difficult schedule to start the year. Of their first 10 games of the season, 7 of them have come against the top 4 teams in the league. If the Rebels can take a victory from league leader New Berlin on Sunday, they will have played .500 baseball against the best there is to offer. The Rebels hope to continue playing solid baseball and earn some more W's in the second half of the season.

Thus far, the Rebels season has been characterized by stellar defense. Genesee has, at times, struggled to get the clutch-two-out-hit and have stranded many runners in scoring position. The Rebels have been in every game, save for their outing against Burlington, and very easily could have notched a few more victories if they had scored a few more runs. From the pitching standpoint, when the Rebs can limit the free passes, they do well. Their pitching has been spearheaded by a three-headed-monster with veterans Matt DeMarais & Keith Koehn being supported with rookie Brett Zickert. Offensively, rookie Alex Kermendy leads Genesee with 12 hits while Matt Bauer and Kyle Stasik are also off to solid starts with 8 hits and 7 hits respectively. Stasik and Kermendy lead the team in RBIs with 6 apiece while rookie Nate Labott has crossed home plate the most with 7 runs scored. Rookie Jalen Bilty has been a hot recent addition for the Rebels, leading the team with a .429 batting average through the 5 games he has played.

The Rebels return to action on Sunday, June 26th when they travel to New Berlin to take on the Lakers with noon start time.
Posted by baseball at 9:38 PM

The Genesee Rebels split a hotly contested double-header with the East Troy Express on Sunday afternoon at Genesee Town Park. The Rebels dropped game 1 after holding a 2-0 lead for nearly the entire game. Pitcher Brett Zickert took a no-hitter into the top of the 7th before a few fly balls dropped allowing the Express to tie the game and ultimately win in extra innings with a  final score of 5-2. Game 2 proved to be another defensive duel as the Rebels outlasted the Express for a final score of 2-1. The two games were some of the best baseball you will see in the league as both teams played at a high level for nearly the entire day.

The split brings the Rebels overall record to 2-3 on the year as they dropped another close game to the New Berlin Lakers by a score of 5-2 and handed an easy 8-1 victory to the Burlington Barons. The Genesee Rebels have turned out stellar pitching and defensive performances thus far. Rookie Brett Zickert has been a force on the mound. His solid innings paired with veterans Keith Koehn and Matt DeMarais give the Rebels a 3-headed monster in terms of a starting rotation. With young arms in the likes of Alex Kermendy, Mike Balistreri, and Derek Urban coming out of the bullpen, the Rebels are setting themselves up for the long haul.

A few other bright spots for the Rebels include the play of rookie infielder Alex Kermendy who has filled the void at second, short, and third while providing some speed on the base paths offensively as well. Kermendy also leads the Rebels in hits with 7. Hits have been hard to come by for the Rebels as no other player on the team has more than 3. In fact, there are 6 Rebels with 3 hits to their name. The low early season numbers can be chalked up to facing good pitching as Genesee has had a tough start to the season facing top teams in New Berlin, Burlington, and East Troy.

Defensively, the Rebels are playing extremely solid defense behind generally good pitching. The team is boasting a 0.969 fielding percentage. A solid fielding percentage behind a team ERA of 4.50 has made for some close games. When the Rebels staff limits the free passes, they are tough to beat.

Genesee returns to action on Sunday, June 12th when they host the Waterford Rivermen for a double-header. First pitch is slated for 12:00pm. See you there. 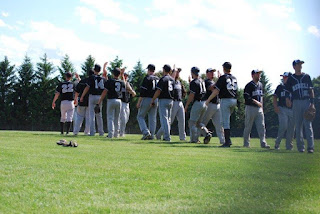