The Genesee Rebels etched their first win of the season on Sunday when the Express from East Troy came to town on a rainy afternoon. The game was highlighted by good pitching, solid defense, and clutch hitting as Genesee found themselves on top of a hard fought 5-4 ball game. It was the first victory of the year for the Rebels who handed East Troy their first loss of the season.

Both starting pitchers came out dealing early. Matt DeMarais took the mound for the Rebels and started off with four scoreless innings while Jeff Smith took the ball for East Troy and had a perfect game going through three before back-to-back doubles by the Rebels Matt Bauer and Keith Koehn plated the first run of the game. The lead was short-lived however as Jeff Smith and Todd Nabor got the Express rolling with a lead off double and two-run shot over the pine trees in right. The Rebels tied it up in the bottom of the 5th with Mike Hodel scoring on a Nick Heckenkamp double to left-center. After 5 complete, the score was tied at 2 apiece.

East Troy looked to take a commanding lead in the top of the 6th as Jeff Tess lead off with a single and moved to third on a Josh Oswald single. With runners on first and third with one out, the Rebels were in a jam. A wild pitch later had Tess crossing the plate and Oswald moving up to 2nd. The inning had the makings of another Rebel meltdown, but, two pitches later, DeMarais promptly picked Oswald off of 2nd base and then induced an inning ending ground out to first base.

The Rebels would wait until the bottom of the 7th to take the lead for good. The bottom of the order, which has been the achilles heal for the Rebels thus far in the season, came up huge. Mark Switalski lead off with a walk and moved up to second on rookie Brandon Molkentin's first Land O Lakes hit. Matt Bauer continued his hot streak at the plate with a single that loaded the bases with one out. Keith Koehn hit a hard ground ball to short which looked like it might lead to an inning-ending double-play, but the Express were unable to turn two as Switalski crossed the plate to make it 3-3. Chris Elliott then hit a rocket to Center Field which hit off the wall, scoring two runs and giving the Rebels a 5-3 lead.

DeMarais stayed out on the mound for the 8th and stranded a runner on 3rd base to maintain the 2-run lead heading into the 9th. The Express made it interesting in the 9th as Oswald led off with a single and moved to third when Koehn threw a Jeff Smith groundball into right field. With first and third and nobody out, it looked as if the wheels might come off. DeMarais and the Rebels pulled it out, however, with three straight popups to end the game.

The win was desperately needed by the Rebels who dropped their first two games of the year to Waterford and North Prairie respectively. It was a solid team effort and a great win against a very good East Troy team. Matt Bauer lead the Rebels with two hits on the day while Elliott and Koehn each drove in 2 runs apiece. As mentioned earlier, rookie Brandon Molkentin looked more comfortable in his at-bats and played a solid 2nd base. Mark Switalski made a superb catch down the right field line to save a run late in the game and Nick Heckenkamp battled off a week-long illness to catch 9 strong innings behind the plate. DeMarais had a solid outing on the mound allowing 9 hits while striking out 4 and walking none. He took a rocket line drive off his chest and left arm in the 3rd inning but was able to stay in the game after surviving the near death experience.

The Rebels are back in action next Sunday when they travel to Oconomowoc to take on the Titans.
Posted by baseball at 3:14 PM

The Genesee Rebels dropped their second straight game to start the 2015 season on Sunday when they lost to the Dawgs from North Prairie 6-1. While it looked like rain storms might be the downfall of the Rebels, it ended up being their absent offense that led to the loss. Unable to come up with the big hit when it mattered, the Rebs mustered only a single run against a young North Prairie team.

The Dawgs have a revamped and rejuvenated lineup as they have acquired quite a few young players from Carroll University and the surrounding area. It was their pitching and timely offense that helped lead them to victory. The Dawgs arms combined to only allow 4 hits and 1 run. They kept the ball low and the hitters off balance. You need to score runs to win, and the Rebels could not do that.

On the other hand, it was the Dawgs who slowly and methodically built a lead. A few runs here and a few runs there, a misplayed fly ball, a double to the gap, a missed cutoff, a bloop, a single, and it all  ended with a total of 6 runs crossing the plate. The damage could have been worse as Genesee's infield cut down 3 runs at the plate, twice foiling a first and third play.

Offensively, the Rebels had their opportunities with runners reaching scoring position in 4 of the 9 innings, but they could not come up with a clutch hit when it mattered most. Chris Elliott and Matt Bauer continued their hot start at the plate by each pounding out a hit or two. Other than that, there wasn't much offense at all. Credit goes to the North Prairie pitchers for keeping the Rebels off balance.

Despite the fact that the Rebels have started 0-2, confidence is still high. There is a lot of baseball left and it's just a matter of time before the hits start falling and the runs start streaming across the plate. The addition of a few young players mixed in with a core of returning veterans has Genesee looking forward to playing more ball.

Genesee returns to action next week when they host the East Troy Express next Sunday, the 24th at 1:30pm at Genesee Town Park.
Posted by baseball at 9:11 PM

Rebels get a "wake up" call

Well, that wasn't the way the Rebels wanted to start their 2015 campaign. The always solid Waterford Rivermen came into Genesee on Saturday and laid a good old fashioned whooping on the shorthanded Rebs. With a final score of 17-7, the Rebels were outhit, outpitched, and outplayed in the season opener. Have no fear, however, as the Rebels are far from calling the season a wash and still have high hopes for the rest of the season. They are not ready to call themselves the Brewers! 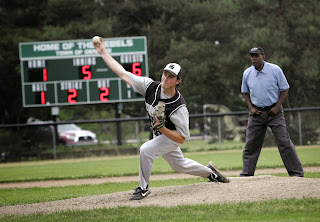 The game started well for the Rebels who jumped out to a 1-0 lead through the first 3 innings. Starting pitcher Matt DeMarais kept the Rivermen off balance through three, but Waterford finally got to him in the fourth. They put up four runs off of a single, two doubles off the wall, and a towering home run that cleared the trees in right field. Down 4-1, the Rebels changed pitchers and went with Keith Koehn who did not get much help from his defense. A small strike zone, a collection of well-hit balls, and multiple errors by players playing out of position brought the Rebels into a sizable hole from which there was no return. Koehn pitched well, but the bats and errors become overwhelming.

A bright spot on the day was the Rebels offense. After finding themselves down 17-1, the Rebels managed to fight back and bring the score to 17-7. Scoring 7 runs in a game should be more than enough to win and doing so with a lineup missing a few key bats was very encouraging to see. Matt Bauer, Chris Elliott, and Mike Hodel each stung the ball during their at-bats and nearly every Rebel in the lineup reached base at some point during the game.

Another bright spot was the play of Matt Bauer and Mike Hodel in the infield. Bauer proved that he can truly "do it all" by handing the ShortStop position "like a man." Chris Elliott was quite proud of his teammate and even teared up a little during the postgame interview claiming that Bauer's play was "truly inspirational and motivational." Hodel added a web gem or two at second base. The two of them showed that outfielders are athletes too while DeMarais proved that pitchers should stay on the mound or in the dugout!

Losing by 10 runs is never fun, but the Rebels are looking at this game as a tune up for the rest of the season. Now that they have their legs under them and with the return of a few key players next week, the season should turn quickly around and the Rebs will be back on the winning side of things.

They return to action on Sunday with a 1:30pm game in North Prairie.

Opening Day is finally here! The Genesee Rebels open the 2015 season on Saturday, May 9th with a home game against the Waterford Rivermen. First pitch is scheduled for 1:30pm at Genesee Town Park. The Rebels will be playing with a shortened roster as they away the return of a few of their collegiate athletes but are excited to get things going.

The concession stand is stocked. The field is prepped. The teams are ready. Come on out and watch some baseball!
Posted by baseball at 8:13 PM